If it seems to you like the stock market is living in a different reality than the rest of us, you are not alone. The stock market, as measured by the S&P 500, is now higher than it was at the start of this year and as of the time of this writing is less than 1% away from its all-time high reached on February 19th.

This is despite the fact that over 30 million people are now receiving unemployment assistance in the US, compared to only about 2 million at the start of the year. This is also while S&P 500 operating earnings for the 2nd quarter are coming in down -40% from the same time last year and full year consensus earnings for this year are still forecasted to be down approximately -30% vs 2019. 1

As you will see in the chart below, historically, the S&P 500 has pretty consistently bottomed 3-6 months prior to the end of a recession.

Since recession end dates are based on when economic data stops getting worse, that 3-6 month lead time will probably hold true in this case as well. Third quarter GDP growth is likely to appear strong from the low base that was set in the 2nd quarter.

The major caveat is that while in hindsight the stock market may appear to be forward looking, on its own it is essentially useless information in real-time. This is because of how consistently it sends false signals. After all, if you assumed a recession was on the horizon every time the market fell 5-10% then you would be predicting a recession every single year.  As the old saying goes, “the stock market has predicted 9 of the last 5 recessions”.

While the market may be forward looking, it would appear it has pulled out the binoculars this time, either that or virtual reality goggles. Not only has the stock market signaled the start of a recovery (which is normal), it has essentially returned to levels as if nothing ever happened. History shows us that this level of optimism is not normal.

In fact, during severe recessions when the S&P 500 has experienced declines over 30% its recovery has generally lagged the completion of economic recoveries as measured by GDP returning to its previous peak. If we look at each past recession since 1950 where the market has fallen more than 30%, we see that GDP returned to its previous peak before the S&P 500 returned to prior highs each time.

Even with 20% annualized GDP growth in the current quarter, which is the current estimate by the Federal Reserve Bank of Atlanta 2, GDP would remain down further than it reached in the depths of the 2008 recession.

But what is “The Market”

Anytime you tune into financial market commentary whether it be on the TV or in print, you can’t escape talk about this mythical “Market”. The market is up today, the market is down today….as if “The Market” is some monolithic entity. I am not immune to this simple shorthand in my own writing.

The reality is that there are many different ways to measure “The Market”. Chances are when you hear about it, they are really just talking about the S&P 500 index. However, it is important to understand what this means and how it might shape your perception of what the broader markets are doing.

When someone talks about the S&P 500 they are really only talking about large US based companies (roughly representing the 500 largest publicly traded companies in the US). In addition, it should be noted and is especially important today, it is not equally weighted among those 500 companies but is market-capitalization weighted...meaning those companies trading at a higher market value make up a higher weighting in the index.

This is important to understand today because although it is an index of 500 companies, the largest 5 companies in the index currently make up approximately 23% of its weighting 3...That is quite a bit less diversification than one might expect.

This also may help further explain why “The Market” might seem detached from the economy. Those 5 companies represent about 23% of the S&P 500 index but less than 1% of employment.

You can see the impact weighting can have on our perception of performance in the chart below. In this chart we show the relative performance year-to-date of the S&P 500 vs the equal weighted S&P 500, as well as versus other market-capitalization weighted indexes which represent different segments of “The Market”. 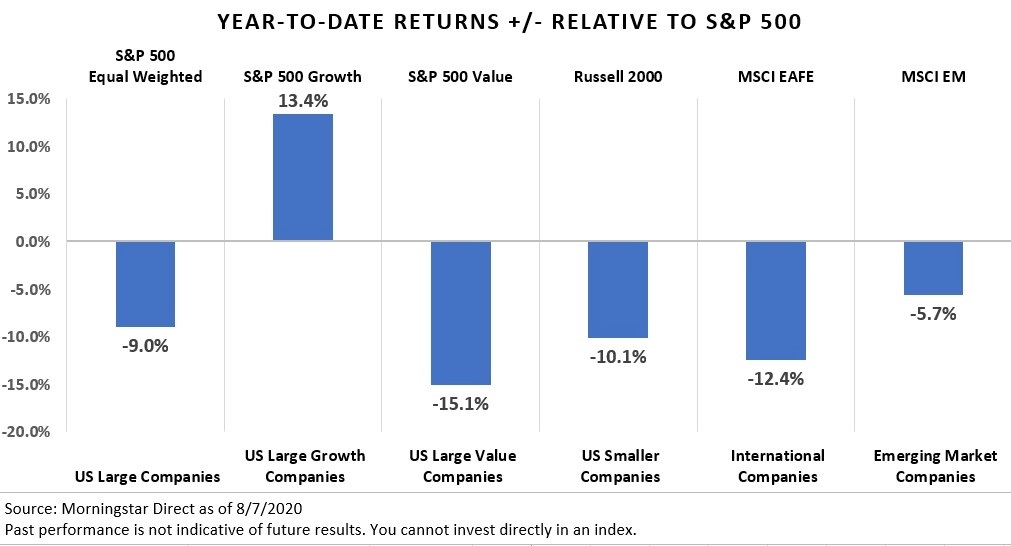 As you can see, your perception of market performance can vary dramatically based on the index you are using to anchor that view.

Perception Is Not Reality

It is important to remember that perception is not always reality, your perception is just your reality...for the moment There is little doubt that by most broad measures of economic impact, COVID-19 is worse than the 2008 global financial crisis. However, that may or not be the case for you individually based on your own situation. As the saying goes “It’s a recession when your neighbor loses his job; it’s a depression when you lose yours.”

Similarly, your view of 2008 vs 2020 will be shaped largely by what industry you work in. Or if you are a retiree, you may pay more attention to the financial market impacts and make your comparisons based on that.

The Markets are made up of a vast number of individuals making decisions based off their own perceptions and those perceptions can change quickly either based off new information or old information viewed in a new light. Just like the duck in the below image…. 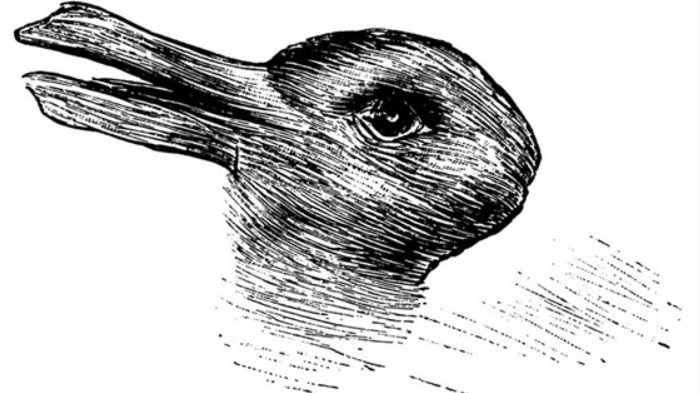 Or did you see a rabbit? (for those that only see one or the other…the duck is facing left and the rabbit is facing right). Sometimes the consensus view of markets can change just as quickly. This is why it’s important to build a portfolio using time tested principles of diversification with your own goals and objectives in mind and not make major deviations based on short-term views and perspectives.

This is not to say there is not a place for fine tuning portfolios based on a dynamic and changing investment landscape. Indeed, we believe strongly in active management and allowing managers to find rabbits when the market only recognizes ducks. However, it is important to stay diversified with the recognition that there may be more than one way to look at a situation.

It is our goal to keep you anchored to your goals and objectives amid a world full of quickly moving and seemingly conflicting information. As always, don’t hesitate to reach out should you have any questions or concerns.

Opinions expressed are not intended as investment advice or to predict future performance.  All information is believed to be from reliable sources; however, we make no representation as to its completeness or accuracy.  All economic and performance information is historical and not indicative of future results.  Asset Allocation, which is driven by complex mathematical models, should not be confused with the much simpler concept of diversification. No investment strategy can ensure profits or protect against loss. Additional risks are associated with international investing, such as currency fluctuations, political and economic instability, and differences in accounting standards. Past performance does not guarantee future results.