Our May 2015 Market Commentary

A MESSAGE FROM YOUR FINANCIAL TEAM
Dear Clients,
We could spend this letter going into detail on the topics du jour, such as if/when we think the Fed will finally raise interest rates (they will...eventually). Or whether Greece will leave the Euro (they probably will...eventually). Or what we think of China’s growth (It will continue slowing...Slowly).
However, instead of focusing on these popular short-term topics, I thought we would focus on what we believe can be more detrimental to investor returns than any of those issues over the long-term.
Chasing Performance
While we touched on this subject in our last letter as well, it is a concept worth emphasizing. Just as night follows day, investor interest in a particular investment follows performance. When an investment theme has done well, confidence in it grows and investors extrapolate that into the future. However, history has shown us this is a tendency which has been detrimental to investors long-term performance.
Using results from a study1 conducted by the investment management firm GMO, below I have illustrated the negative results of chasing returns. In this study they looked at all developed country stock markets from 1984-2014 and analyzed all rolling three-year periods. For each period they grouped together the 20% of top performing countries and 20% of worst performing countries. They then looked at how each group performed going forward for the next 3 years versus the performance of the average country. 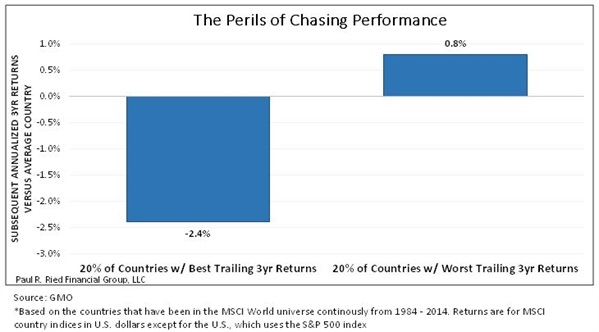 As you can see, countries that had recently done the best went on to underperform by 2.4% per year. Countries which had recently done the worst went on to outperform those that had done the best by 3.2% per year.
The detrimental effects that chasing performance can have has been illustrated time and time again. Noticing that many mutual fund investors decide to sell a fund based on short-term relative under-performance, Vanguard decided to run a simulation to see what type of effect that could have on longer-term performance.
In this study2, Vanguard simulated a performance-chasing strategy which started with funds that had above average returns for the most recent three year period, then if any fund fell below average during any three year period they would sell it and buy a new fund which ranked within the top 20 funds of its category based on trailing performance. The buy-and-hold strategy in contrast would just continue holding the fund despite three year underperformance. They did this for all funds within nine different fund categories. The results were robust, performance-chasing lead to significantly lower returns across all fund types.

While that is just a simulation of the results someone could expect from chasing performance, we also see it play out in actual investor experience. As an example, below I have included two large mutual funds and their corresponding returns over the last 15 years and next to that I have included the returns investors in those funds have realized over that same period (Morningstar calculates investor returns by analyzing the timing of investor buys and sells into the fund).

While that was a rough 15 year period for stocks, investors in the Vanguard 500 Index fund3 realized only a quarter of the returns that the fund itself produced over that period due to poorly timed buys and sells. This behavior was also present in the Vanguard Total Bond Market Index fund4. The only reason that the performance gap in the bond fund is not greater is likely because bonds are less volatile and so investors were given less dramatic opportunities to make poor timing decisions.
"We don't have to be smarter than the rest. We have to be more disciplined than the rest"
--Warren Buffet
The key to any successful investment strategy is staying disciplined. A strategy not adhered to is not a strategy at all. Until recently, the emotional siren call of near-term performance had been blaring loud for Large U.S. Stocks. In fact, in December, Reuters reported that funds focused on US stocks recorded their largest weekly inflow on record (records which went back to 1992). Interestingly, so far year-to-date international stocks have outperformed US stocks by over 7%5.
It is our hope that anytime you start to hear the alluring siren call of near-term performance, you can tame that urge in light of where history tells us that is likely to lead.
We are dedicated to assisting you in meeting your long-term goals and objectives. Should you have any questions, don’t hesitate to e-mail or call our office.

Prepared By:
Adam Jordan, CIMA®, AAMS®
Director, Investment Research and Management
Registered Principal*
Opinions expressed are not intended as investment advice or to predict future performance.  All information is believed to be from reliable sources; however, we make no representation as to its completeness or accuracy.  All economic and performance information is historical and not indicative of future results.  The S&P 500 is an unmanaged group of securities considered to be representative of the stock market in general.  You cannot invest directly in an index.  Past performance does not guarantee future results.
1 - *GMO Quarterly letter 4Q 2014 – “Ditch the Good, Buy the Bad and the Ugly” by Ben Inker
2 – Vanguard - Quantifying the impact of chasing fund performance – July 2014
3 – Vanguard 500 Index Fund Inv (VFINX) this is not a recommendation to buy or sell any security
4 – Vanguard Total Bond Market Index Fund Inv (VBMFX) this is not a recommendation to buy or sell any security
5 – U.S. Stocks represented by the S&P 500 and International Stocks represented by MSCI EAFE from 1/1/15 to 5/15/15