While 2018 started out on a good note for the stock market in January, Santa brought a lump of coal for Christmas. December 2018 officially went down as the worst December for the US Stock market since 1931. As you can see below, most categories were negative for investors in 2018.

As is usually the case, when things are not going well for the markets there is no shortage of finger pointing or blame to go around (whether deserved or not). One primary target of this blame more recently has been the Federal Reserve, as they continue on their path of increasing interest rates to more normal levels.

Investors would be justified in thinking there appears to be some major mixed messaging regarding the economy. On the one hand, the President is constantly emphasizing how the economy “is stronger than ever”, yet at the same time arguing that the Federal Reserve is raising rates too much for the economy to handle. This is while the Federal Funds rate is not even at half the pre-crisis level of 2007.

In addition, an executive order was issued to freeze federal worker pay increases for 2019, an authority granted only for “national emergency or serious economic conditions affecting the general welfare”. The last time such pay freezes were implemented was in 2011-2013, in the aftermath of the financial crisis. Not exactly a measure someone would expect to be implemented in a strong economy.

Apparently, we are living in upside down times when contradictory situations can exist at the same time. Either that, or more likely, one of the two beliefs are untrue. Either the economy is more fragile than many claim, or the economy is strong and can support more normal rates.

Before 2018 came to a close, the majority of stock markets around the world had entered bear markets (somewhat arbitrarily defined as a peak-to-trough drop of at least 20%). At this point, the deepest part of the US decline (as measured by the S&P 500) was -19.4% reached on Christmas Eve. While that does not technically hit the 20% threshold, we think it is fair to call that a distinction without a difference (other measures of the US Stock market7 did breach the 20% threshold).

There is an old proverb that says “For bears, winter is one night”. Unfortunately, for investors, the psychological chill from bear markets seems to last longer…and the sleep, not as good! Thankfully spring does eventually arrive, although the severity and length of the winter freeze is hard to predict.

Below is a graph of all the bear markets since 1960, including the time to reach the eventual bottom, the severity, and the time it took to recover to the previous market peak. 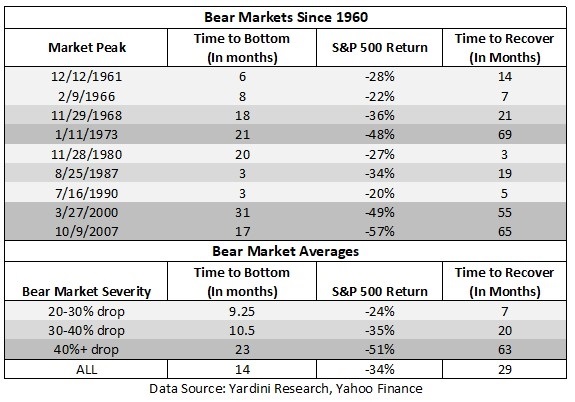 As you can see, the less severe bear markets of 20-30% haven’t taken all that long to recover from. It has only taken 7 months on average, with the longest being just over 1 year (14 months) and the shortest taking only 3 months.

Unfortunately, you can only tell how deep the bear market will be in hindsight. Also, even though less deep bear markets have recovered much quicker in the past…as we all know, past performance does not guarantee future results.

Currently, this decline is on par with the severity of the 1990 bear market. Interestingly, the 1990 bear market was also short of 20%, but at -19.9% it was again a distinction without a difference. The recent fall has similarly unfolded over the same short 3 month timeframe. Although, only time will tell if the levels reached on Christmas Eve will turn out to be the ultimate lows this time around.

If history has proved anything to investors over the years it is that markets can move fast and trying to time tops or bottoms is a recipe for failure. The reality is if someone wants to time the market, they have to get two decisions right, not just one. They have to know not just when to get out, but also when to get back in.

Just look at the 1980 example, investors endured a 27% decline that was drawn out over 20 months…Yet the whole decline was reversed in the matter of 3 months. How many investors gave up on the markets only to see all those losses reversed in a few short months while they were still uninvested?

In hindsight, on paper, staying the course through a bear market is a very simple concept for investors. However, when that paper is their monthly statement, a lot more emotions get involved.

As is usually the case, opinions about the direction of the economy and markets vary widely. There are many factors at play in the economy and a wide variety of possible outcomes as a result of policy decisions that have not yet been made.

Risks in the market are a constant…sometimes they appear much greater, but they are always there. We continue to believe that in the face of uncertainty, diversification & patience are key to reaching your long-term goals.

As always, we appreciate your continued trust and are here to serve you. Don’t hesitate to call or e-mail our office with any questions.

1 – The Standard & Poor's 500 (S&P 500) is an unmanaged group of securities considered to be representative of the stock market in general.
2 - The Russell 2000 Index measures the performance of the small-cap segment of the U.S. equity universe and is a subset of the Russell 3000 Index representing approximately 10% of the total market capitalization of that index. It includes approximately 2000 of the smallest securities based on a combination of their market cap and current index membership.
3 - The MSCI EAFE Index was created by Morgan Stanley Capital International (MSCI) that serves as a benchmark of the performance in major international equity markets as represented by 21 major MSCI indexes from Europe, Australia and Southeast Asia.
4 – The MSCI Emerging Markets is designed to measure equity market performance in global emerging markets. It is a float-adjusted market capitalization index.
5 – The Bloomberg Barclays Capital U.S. Aggregate Bond Index is a broad-based flagship benchmark that measures the investment grade, US dollar-denominated, fixed-rate taxable bond market. This unhedged index was created in 1986.
6 – The Bloomberg Barclays Global Agg Ex US Index provides a broad-based measure of the global investment-grade fixed income markets. The three major components of this index are the US Aggregate, the Pan-European Aggregate, and the Asian-Pacific Aggregate indices.
7 –The Wilshire 5000 Total Market Index is a market capitalization-weighted index composed of more than 6,700 publicly traded companies . The Russell 3000 Index measures the performance of the largest 3,000 U.S. companies representing approximately 98% of the investable U.S. equity market.

Opinions expressed are not intended as investment advice or to predict future performance.  All information is believed to be from reliable sources; however, we make no representation as to its completeness or accuracy.  All economic and performance information is historical and not indicative of future results.  The S&P 500 & other indexes are an unmanaged group of securities considered to be representative of the stock market in general.  You cannot invest directly in an index.  Past performance does not guarantee future results.