As we come up on the close of another year, we also are coming to the end of one presidency and on to another. Regardless of anyone’s political views, we can all be happy that the campaign season is finally over. In an election billed as a contest between the two most disliked presidential candidates in modern history¹, it is only fitting that the winner managed to lose the popular vote (as of this writing Hillary Clinton was ahead by just over 2.6 million votes2).

What It Means (To Be Determined)

It is quite interesting to see how quickly the stories in the media change based on the movements of the markets. Prior to the election, headlines were filled with reasons why a Trump victory would be bad for stocks. This narrative was only amplified on election night when it became clear that Trump would likely win and S&P 500 futures hit their limit down of 5%. However, almost all those losses were reversed before markets opened the next morning and the S&P 500 actually closed the day up over 1%.

US Stocks have continued to do well over the last month and the media has coined this move the “Trump Rally” and have built a new narrative describing why his policies should be good for stocks. The reality is he has always had some market friendly policies (in theory) and market unfriendly polices (in theory). However, whether policies turn out to be good or bad for markets is completely dependent on the final details, all of which remain to be determined.

The Good, The Bad and The.…Unknown

Meanwhile, investors seem to be taking the possible “stock unfriendly” measures in stride. Those include the prospects of

However, just as the stories changed regarding Trumps likely impact on the markets, the narratives can also change regarding the expected positive or negative impacts of individual policies. Particularly as the details get worked out. It is also important to keep in mind there can be a big difference between what is good for the markets and what is good for the economy as a whole.

An example of that would be the corporate “tax holiday”. A similar tax holiday was enacted in 2004 to much fanfare for the perceived boost that money would give the economy as it was reinvested into new projects here in the US. However, little of that money was invested in projects here despite stipulations regarding how the repatriated cash be used. In the end, money is identical on a company’s balance sheet and individual dollars cannot be directly tracked.

A 2011 government report3 illustrated that well. An analysis of the top 15 firms which took advantage of the tax holiday (and accounted for about half of the money brought back) showed that those companies shrank their workforce by over 20,000 jobs and reduced their pace of R&D investment. In addition, the companies increased their amount of stock buybacks and increased executive pay by over 27%. Overall, it was concluded, each dollar of repatriated cash was associated with 60 to 92 cents in payouts to shareholders (in the form of stock buybacks or special dividends).

That would be an example of what can be good for certain stocks but not necessarily good for the overall economy. The timing could also change whether it ends up being good for stocks in the long run. This is because in 2004 stocks were much cheaper as they were only a year off the lows of the tech bust. Today we are over 7 years into a bull market. If companies were incentivized to employ that strategy today, it could result in much less benefit.

In the month following this year’s election US Stocks4 were up 5% and International stocks5 were up about 1%. Meanwhile, as yields have risen, Bonds6 were down just over -2%.

So how does this rally compare to previous elections and what does this tell us about returns going forward? As you will see in the chart below, while this was one of the stronger post-election rallies for US Stocks, it tells us nothing going forward. There is essentially no correlation between the S&P 500 returns experienced in the first month and returns over the full year. In fact, as you can see, the median return the first month after a Republican Presidential victory is +4%. However, a full 12 months after the election the median return is -3%. 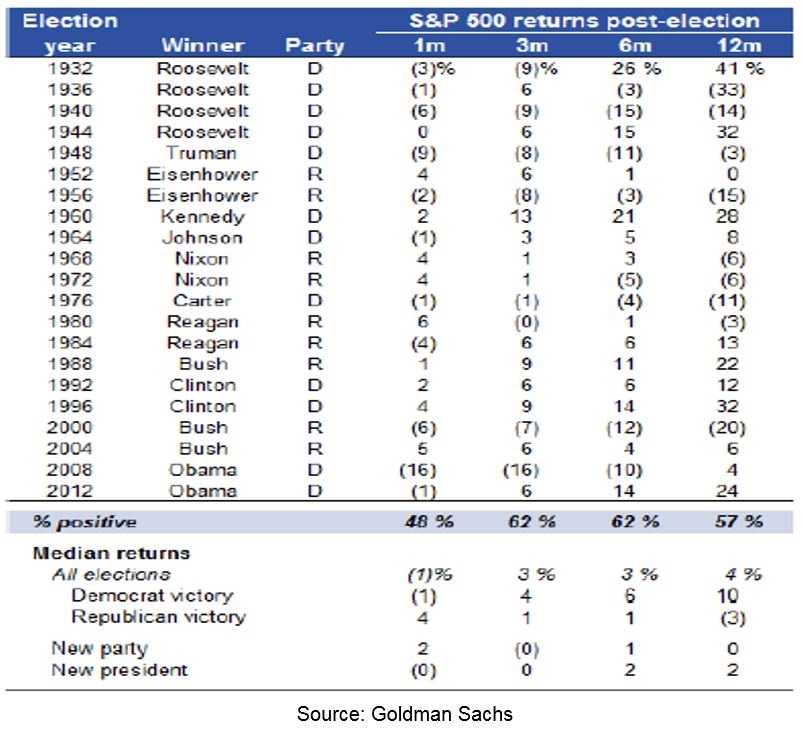 It turns out that the returns following each election are uniquely different. Not because of who was elected president but because of the unique demographic and macroeconomic trends of each period. Those are the factors that really drive markets.

Plans Are Bigger Than Presidencies

Each of your asset allocation strategies are built with your individualized goals, objectives and risk tolerances in mind. We will continue monitoring the economy and the individual fund management teams within your portfolio, and make changes as needed.

As always, we encourage you to call or e-mail with any questions.

¹ - “Trump vs. Clinton Poised to Be Battle of Most Disliked Nominees in Decades” http://abcnews.go.com/Politics/trump-clinton-poised-battle-disliked-nominees-decades/story?id=39306014
2- http://www.presidency.ucsb.edu/showelection.php?year=2016 – as of 12/10/2016
3 - “Repatriating Offshore Funds: Tax Windfall for Select Multinationals,” United States Permanent Subcommittee on Investigations, December 14, 2011, http://www.gpo.gov/fdsys/pkg/CPRT-112SPRT70710/pdf/CPRT-112SPRT70710.pdf
4 – Represented by S&P 500 5 – Represented by MSCI ACWI ex US 6 – Represented by Bloomberg Barclays US Agg Bond Index

Opinions expressed are not intended as investment advice or to predict future performance. All information is believed to be from reliable sources; however, we make no representation as to its completeness or accuracy.  All economic and performance information is historical and not indicative of future results.  The S&P 500 is an unmanaged group of securities considered to be representative of the stock market in general.  You cannot invest directly in an index.  Past performance does not guarantee future results.