As we are approaching the end of a roller coaster year in most markets, many asset classes are now nearly flat or negative for the year.

All Eyes on the Fed

All indications are that the Federal Reserve will finally announce a raise of their target short term interest rate (Federal Funds Rate) at their meeting on December 16th.  While moves by the Federal Reserve always garner attention, markets have been hyper focused on when the Federal Reserve will finally raise short-term rates. Ever since the summer of last year, when the Federal Reserve indicated that they would be ending their bond buying program that October, speculation quickly began about when they would actually raise rates. Nowhere has this expectation for a rate increase been more evident than in the reaction of the US Dollar. As the chart below shows, the US Dollar index has risen approximately 25% since the summer of 2014 (the US dollar index measures the value of the US Dollar relative to a basket of international currencies). 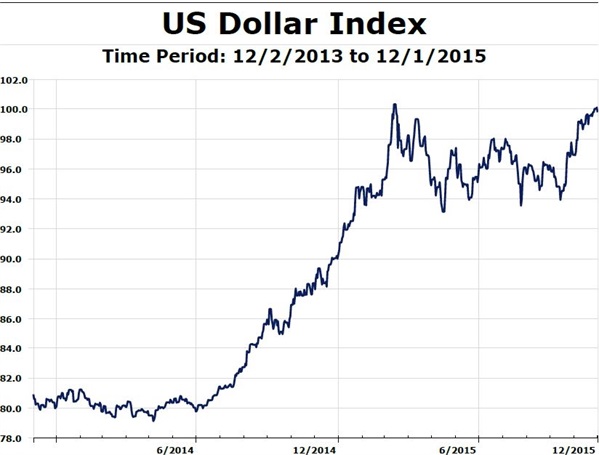 This has been a headwind for assets denominated in other currencies such as international stocks and bonds. This has also hurt earnings of U.S. based companies that sell a large portion of their goods overseas. Many commentators are taking a continued strong dollar as a given going forward due to the expectation of continued rate increases, however, history points to a more cautious view. The chart below shows how the dollar has performed the last five times after the Fed’s initial rate hike. 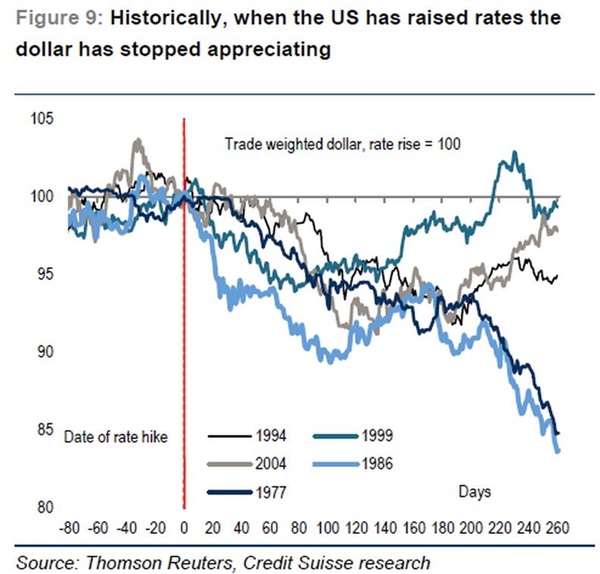 Obviously past performance is no guarantee of future results and each scenario has different factors at play. However, often much of the rise in the dollar has taken place well ahead of the Fed actually raising rates.

The upside to the strong dollar has been lower oil prices and lower commodity prices in general. While a lot of that is also due to supply & demand issues, particularly excess supply of oil and decreased general commodity demand from China, the significant impact of the strong US Dollar on commodity prices can’t be overlooked.

Lower oil prices have definitely been a help to US consumers as their bill at the pump has gone down. However, unlike 10-15 years ago when we imported most of our energy, it’s no longer a one sided equation. Back then fewer jobs relied on the industry, but now extended low prices mean lost jobs and profits in a much bigger domestic energy sector. Due to the Shale oil boom, those employed in the Oil & Gas extraction industry had increased almost 60% since 2005, before peaking late last year7. That compares to about a 4% rise in total employment during the same timeframe8.

While consumers have been spared the expense at the pump, many people are feeling the pinch when it comes to rents. As you can see below, in recent history rents have never consumed this much of people’s income (this chart shows the percentage of the median income in the U.S. consumed by the median rent).

Clearly rent increases are far outpacing income gains. Fortunately, mortgage affordability for buying a home is actually better than its long term average, helped by current low rates. However, mortgage affordability assumes that the buyer can put down 20%. I think it is safe to say the biggest obstacle for many in the decision of renting vs owning is not the monthly payments, but the large out of pocket expense of the down payment.

By now I’m sure many of you have heard all about China’s massive building and overbuilding of real estate which had been taking place for years, resulting in many “Ghost Cities” (if not you can google it). However, should China’s stock market and slowing economy continue its troubles, another aspect that may be worth keeping an eye on is the link between China and real estate in certain places here in the United States.

According to the National Association of Realtors9, International buyers purchased $104 Billion of Residential US Real Estate in the 12 month period ending March 2015. Five years prior that was $66 Billion (or a 58% increase). In 2010, buyers from China were the 3rd largest purchaser of US residential property accounting for about 17%. Currently buyers from China are the largest, accounting for approximately 28%. The next closest is Canadian buyers at only 11%. The graph below helps put into perspective the dramatic increase over the last few years. 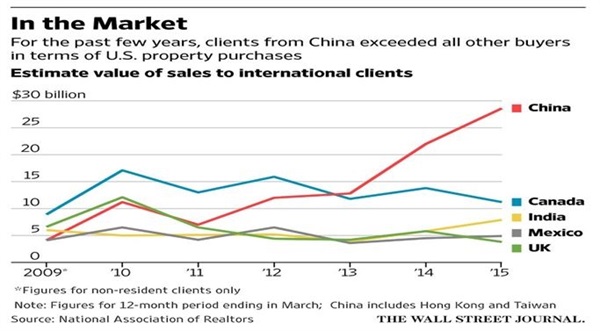 Should Chinese buyers pullback, it would be expected to impact higher-end properties on the West Coast & New York. The average purchase price by Chinese buyers was about $831K the average purchase price by the next four largest buyers (Canada, India, Mexico, UK) comes to less than half that price ($392K). The chart below shows the locations that have been favored by Chinese home buyers. 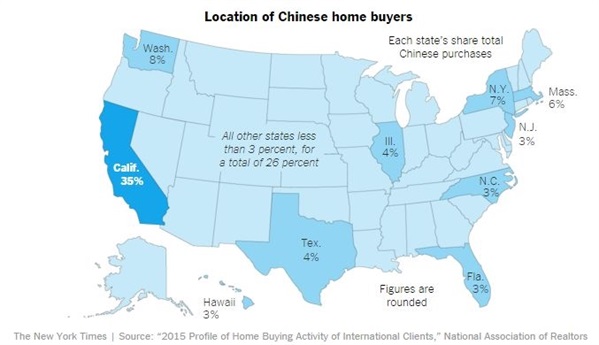 We believe that the way to build the most robust investment strategy is to understand that in the investment world, the only certainty is that there is no certainty. In order to achieve long-term goals we must balance risks but they cannot be completely avoided.

As always, we continue to monitor the economy and the individual fund management teams within your portfolios and make changes as needed. We are here to serve you and encourage you to call or email with any questions.

Opinions expressed are not intended as investment advice or to predict future performance.  All information is believed to be from reliable sources; however, we make no representation as to its completeness or accuracy.  All economic and performance information is historical and not indicative of future results.  The S&P 500 is an unmanaged group of securities considered to be representative of the stock market in general.  You cannot invest directly in an index.  Past performance does not guarantee future results.