Following the United Kingdom’s vote on June 23rd to leave the European Union, the S&P 500 fell approximately 5% over the next two trading days as investors worried about what the vote meant for the markets and economy. However, within only two weeks, not only had the S&P 500 recovered those initial losses but it surpassed the all-time highs set in May of last year.

After unforeseen events occur the natural investor urge is to “do something”. However, more often than not, taking no action is the right answer. The market took less than two weeks to recover from the “Brexit” vote. That is quite surprising until you look at a sampling of other major events that the market recovered from in two weeks or less1.

In some cases, such as the 9/11 terrorist attacks, the markets fell to lower levels after making the initial recovery but that is because the event took place during a broader bear market unrelated to the event itself.

However, it is important to keep in mind that by taking no action, you are in fact “doing something”. You are sticking to an investment strategy which was specifically designed and diversified with the understanding that unexpected events are inevitable.

Who would make a loan (or buy a bond) at a negative interest rate? The obvious answer until recent years would seem to be “Nobody” …. unless they were feeling particularly charitable. In fact, the Bank of England addressed this very topic in a report back in 2003. (Bold emphasis added).

Central Bank policies over recent years have made the unthinkable a reality. As you can see in the graph below, not only are negative-yielding bonds a reality…. they now make up approximately 32% of the Global Bond Index! 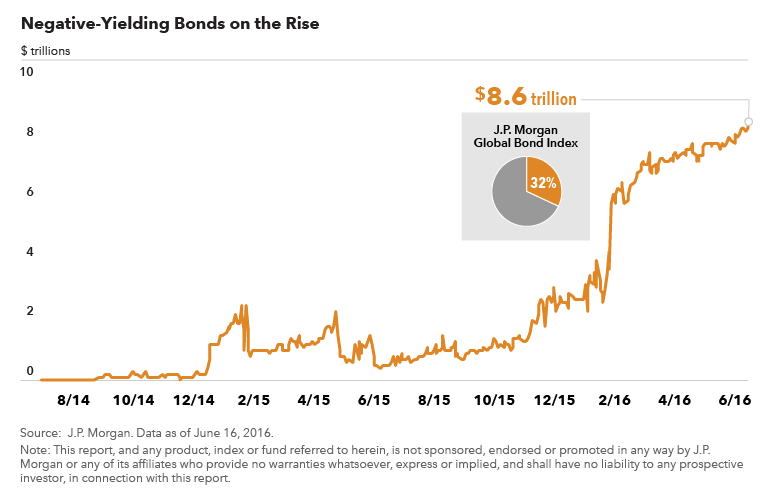 So who owns this $8.6 Trillion of negative yielding bonds? Well, besides the Central Banks themselves, they are also owned by commercial banks and insurance companies largely in order to comply with certain regulations.

However, these bonds are also owned by many regular investors as well through index funds (and other funds which closely track indexes). As you see in the chart above, a good portion of an index investor’s money intended for global bonds is being invested (knowingly or otherwise) into negative yielding bonds.

Despite the US Central Bank ending its bond buying program in late 2014 and raising the short-term “federal funds rate” in December of last year, longer-term US rates have continued to move lower. This is because markets are global and with so many international bonds yielding less, our low rates look relatively attractive in comparison.

In fact, below I reproduced a chart we made for our July 2014 letter showing government bond yields (prior to the end of the US bond buying program that October) and where they are now. 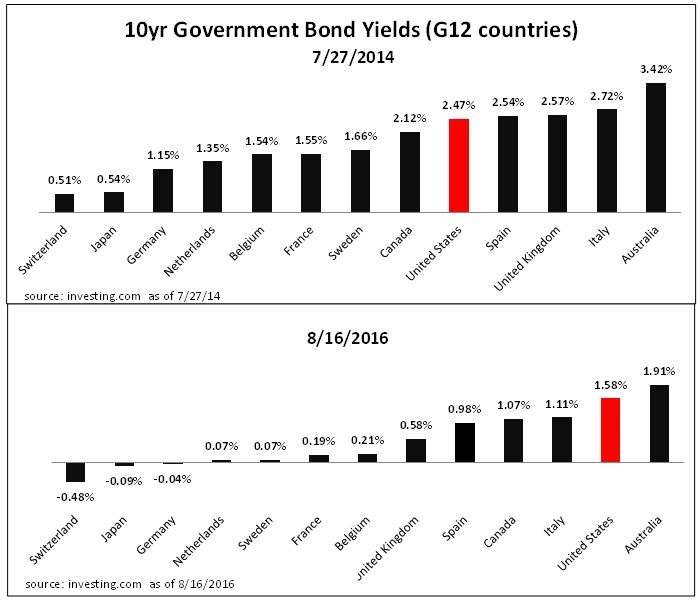 Besides making it increasingly difficult for savers to generate income, this low rate environment has the knock-on effect of pushing investors into riskier investments in search of higher returns. Unfortunately, without improving fundamentals, riskier investments do not automatically translate into higher returns….it may just mean more risk. Stocks need increasing earnings to justify price gains, however, S&P 500 earnings are currently back down to 2013 levels.

“Don’t Just Do Something, Sit There.”

It’s a natural investor inclination to feel the need to do something upon hearing news as it relates to the markets, whether it be about the “Brexit”, negative interest rates, elections or other news of the day. It is easy to overlook the positives of just...sitting there.

Even though investors intuitively know their real time horizon is longer-term, it is easy to get caught up in the day-to-day price movements of the markets. However, it’s important to remember there are only two prices that matter – The price where something is bought and the price where it is sold. A key virtue for investors is patience.

While the investment landscape is ever changing, the keys to successful investing are the same. We remain dedicated to assisting you in meeting your long-term goals and objectives while utilizing flexible active managers within a broadly diversified and customized investment strategy.

As always, we are here to serve you and encourage your calls and e-mails.

Opinions expressed are not intended as investment advice or to predict future performance.  All information is believed to be from reliable sources; however, we make no representation as to its completeness or accuracy.  All economic and performance information is historical and not indicative of future results.  The S&P 500 is an unmanaged group of securities considered to be representative of the stock market in general.  You cannot invest directly in an index.  Past performance does not guarantee future results.